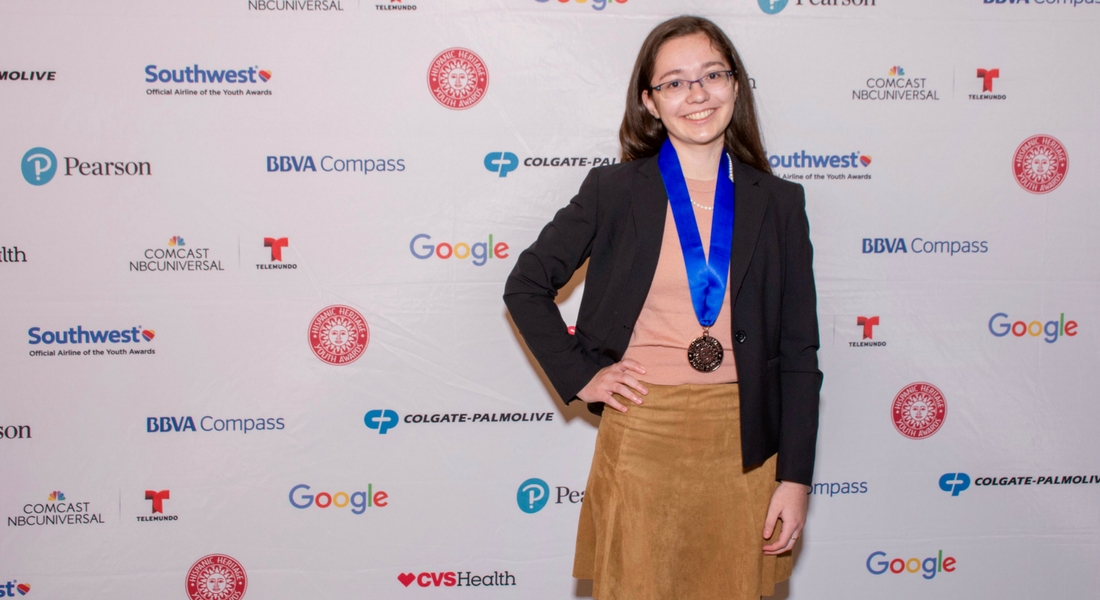 WASHINGTON, DC – The Hispanic Heritage Foundation (HHF), their sponsors, Members of Congress, community and business leaders, and national Latino leaders will honor Disney/Pixar’s “Coco” star Anthony Gonzalez for serving as a source of inspiration for youth. Isabella Lorence, senior at Walt Whitman High School in Bethesda, MD will be honored with the National Healthcare and Science Youth Award and a parent will be surprised with the Parent Award, presented by Pearson at the 19th Annual National Youth Awards.  Singer/Actress Catie Waters will perform a special version of America the Beautiful at the ceremony on Capitol Hill, which is being filmed for broadcast on Vme TV. Details are:

HHF will promote the recipients of the Youth Awards and the parents as role models through a national multi-media campaign (visit https://hispanicheritage.org/ and #NationalYA on HHF’s social media platforms.

The National Youth Awardees and Parent Award include (see www.rsvpya.com for full bios):

The seven National Youth Awardees were selected from more than 200 Regional Awardees and more than 10,000 applicants.  Students were chosen for their leadership in the classroom and community and for their focus on the categories.  The recipients boast high GPAs along with countless hours of community service.  In addition, the youth received grants for their education or a project/idea and are being flown to Washington, DC, by Southwest Airlines for the ceremony with a parent, and will receive personalized styling from Macy’s.

“We are proud to honor Anthony Gonzalez who has brought together families through his work in Coco as well as another class of outstanding young Latino leaders who are already making an impact on our classrooms, communities and soon workforce,” said Antonio Tijerino, President and CEO of Hispanic Heritage Foundation.  “We will also recognize the critical role of parents in the success of a child.  for their impact on their children.  We are grateful to our sponsors for their shared vision and support as we focus on moving America forward.”

Actor/Singer Anthony Gonzalez is a 13-year-old Los Angeles native who was cast in the Disney/Pixar movie ‘Coco’ by serving as the voice of Miguel, a young boy who dreams of becoming an accomplished musician like his idol Ernesto de la Cruz despite his family’s baffling generations-old ban on music.  ‘Coco,’ has brought in over $680 million worldwide at the box office, is the biggest film in Mexican box office history and recently received a 2018 Golden Globe AwardsÒ Win for Best Animated Feature Film.

Prior to his work on ‘Coco,’ Anthony started singing at the age of four when he started doing street performances on Olvera Street in LA with his brothers and sisters.  Anthony performed on the legendary variety show Sabado Gigante, auditioned for Telemundo’s La Voz Kids (The Voice for kids) and acted in Criminal Minds: Beyond Borders and FX’s The Bridge.

Twenty-year-old Catie Waters is a hot up-and-coming singer, songwriters, and actor. From a very young age, she has trained to be a leading force in the arts with a strong conscious and sense of responsibility to give back to her community. She grew up in a small town in Arkansas, moved to Dallas, and now resides in Los Angeles. Catie is an old soul when it comes to her influences which include Marvin Gaye, Amy Winehouse, Stevie Wonder, but also newer artists such as Adele, Lianne La Havas, Janelle Monáe, and Solange. She has a penchant for R&B, Soul, Jazz and Funk— which she infuses with a modern touch that brings us a unique vocal, poetic, and musical style. Her freshman album is the critically acclaimed Stone Child— a fantastical collaboration with super-producer, Caleb Sean and she’s currently working on a new EP set to release in the fall of this year.

Additional sponsors of the Youth Awards include NASCAR, IndieDesk, Macy’s, Crowell & Moring, UPS, Congressional Hispanic Caucus Institute (CHCI), STEM Connector, YWCA, The Raben Group, Friends of the National Museum of the American Latino, and Es Tiempo. The Youth Awards serve as the main feeder to HHF’s “eco-system” of talent through Latinos On Fast Track (LOFT) by tracking, preparing and positioning more than 100,000 vetted youth as they transition from high school, college and graduate school and into their careers.