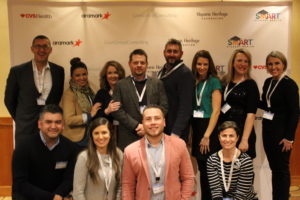 (Washington, D.C.) Congresswoman Terri Sewell (D-AL) and speakers on behalf of Senator Orrin Hatch (RUT) joined multi-disciplinary leaders from the education, healthcare, and private sectors on Wednesday, December 5, at the Dirksen Senate Office building on Capitol Hill for a Congressional Breakfast Briefing hosted by the Hispanic Heritage Foundation (HHF) to hear the latest findings from Dr. Liza Cariaga-Lo of Brown University, regarding the nationally recognized SMART Student Health Model (School Health Model for Academics Reaching ALL Transforming Lives). In light of the sad news of the passing of President George H.W. Bush, special permission was granted for the event to continue on Wednesday, which was a National Day of Mourning. The gathering was dedicated in honor of the life of President Bush. Several key representatives of HHF attended including Antonio Tijerino, president and CEO of HHF, Roberto Callejas, HHF’s Chief of Staff, and Emanuel Pleitez, Chairman of the Board.

Dianne Browning, Professional Staff Member for Senator Hatch, who had planned to open the Briefing, but was called away by the State Funeral for the late President, attended on Hatch’s behalf and delivered his heartfelt regrets, affirming that he was genuinely looking forward to spending time with the school leaders and health care provider partners that are working together to provide the SMART Model to at-risk student populations. Browning stated that from the moment Senator Hatch heard debriefs about the SMART Model, his words were, “This is exactly what communities should be doing.” Browning continued noting that one thing Senator Hatch and President Bush had in common in relation to the gathering that day is that, “The Federal government doesn’t always have all the solutions and it takes communities, it takes education, it takes corporations and private enterprises coming together to forge solutions to take care of families.”

Sewell, U.S. Representative for Alabama’s 7th congressional district, attended the annual event in support of the work of her local constituents and praised the approach and results that SMART has offered to students and community members in her district and across the nation. “I am very proud to be a supporter of the SMART Model, and want to thank all the sponsors: CVS Health, Aramark, Ginn Group Consulting, and especially the University of Alabama, Dr. Karl Hamner, Dr. Peter Hlebowitsh, and Dr. Julia Boothe,” said Congresswoman Sewell. “When you do prevention on the front-end you actually deliver better outcomes on the back-end. It’s so important that we spend our money wisely, the limited resources that we have, and why I am such a passionate advocate for this Model is because I know it can work; it has shown itself to work, not only in Chicago but in rural Alabama, and for that I am very grateful to those that have delivered and implemented this Model, but I would love to scale it throughout my district,” Sewell added.

The keynote speaker, Cariaga-Lo, presented her new Formative Evaluation White Paper, “SMART Leadership: Transformative Change Agents and the Essential Culture and Climate for Achieving Health and Education Outcomes,” as the culminating experience of the inter-disciplinary, multi-sector SMART Symposium, a 2-day event that aims to inspire and edify the grassroots professionals implementing the SMART Model. Dr. Cariaga-Lo, a Harvard educated Psychologist, is the former Vice President of Diversity and Inclusion at Brown, Founder and CEO of LCLO Group, and has previously held positions at Yale and Harvard. This was her second formative evaluation of the model, which has greatly impressed her, as she noted: “The Model also shows great promise in ultimately reducing the financial burden of physical and behavioral health problems on students, their families, and the communities where they live,” she said. “SMART Leaders who have committed themselves to addressing adaptive challenges, in recognition of the centrality of the Whole Child in their solutions will reap great rewards for students, public education and health outcomes, that will be significant and transformational,” said Cariaga-Lo.

David Casey, Vice President, Workforce Strategies and Chief Diversity Officer at CVS Health, recognized those SMART professionals at the Congressional Briefing by offering these words of encouragement: “If you can’t learn, you can’t earn, and you all are a critical factor in breaking those cycles of poverty. You are the ones making it happen, and I want you to know that we are here in your corner; you inspire me, you motivate me, and I could not be happier to be a part of it.” 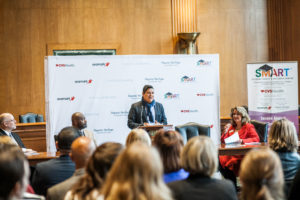 The SMART Congressional Breakfast Briefing and Symposium highlighted the leadership and culture required to sustain this transformative solution that is delivering dramatic outcomes for entire school populations in both urban and rural flagship sites, from grades pre-kindergarten–12. The annual event is hosted by HHF, SMART’s multi-cultural advisor, and Ginn Group Consulting (GGC), architect of the Model, and is sponsored by CVS Health and Aramark.

“The Hispanic Heritage Foundation’s mission has been expanded thanks to Melanie Ginn’s connectivity, strategy, and vision. From working with us to develop a sustainable and measurable track for Latino talent into healthcare fields with CVS Health to spearheading innovative research and models that deliver economic impacts, like SMART, she facilitates and brokers bringing partners together for the common cause of moving communities and America forward,” said Tijerino.

Congresswoman Jan Schakowsky (D-IL), whose schedule was also affected by the State Funeral, sent her support, reflecting on the impact of the SMART Model at her alma mater, Sullivan High School, saying, “For too many of our students, the barriers to good physical and behavioral health are negatively impacting their capacity to learn and subsequent socio-economic life trajectories. With the Model’s Active Access, Active Care strategy in place, which entails the clinic staff working in close partnership with the principal and his faculty over the past five years, the outcomes and impact on students have been consistently significant.”

SMART is a school health solution dedicated to improving academic achievement in order to break the cycle of poverty, creating a new, antecedent component on the health care continuum. The award-winning publicprivate partnership that fuels the SMART Student Health and Wellness Model is revolutionizing health care in public schools. This best practice Model is being successfully operated in selected urban and rural regions, including Chicago and rural Alabama, with plans to expand to other cities over the next 5 years.

SMART was developed in Chicago in 2013, and the flagship SMART Center at Sullivan High School has now entered its sixth year of operation. There, the Model has a tremendous track record of routinely consenting an average of 98% of the student population and providing care for 100% of those students, thus significantly increasing attendance by 3-4%, and improving the school’s academic metrics and rating, all at lower operational costs than traditional models. Active Care, a key component of the SMART Model, is deployed via Active Access, a dramatically changed capacity for impact, routinely reaching 95–98% of students, without increasing net costs. Sullivan Principal Chad Adams credits the SMART Model with influencing the culture of his school, “As I reflect on the turmoil I encountered while working to turn around a failing school, I now realize that having the SMART clinic was the primary differentiator for us in that process,” he says. 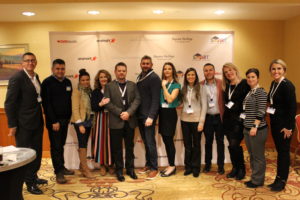 “I want to thank the many disparate stakeholders who came together, willing to make changes that allowed for this true innovation,” said Melanie Ginn, President and CEO of Ginn Group Consulting. “The proof of concept we have now in the SMART Model shows that the trajectory of young lives can be positively supported when we break down silos between health and education and work together to swiftly design and deliver meaningful, lower-cost solutions.” This past summer, Ginn, presented the SMART Model’s latest metrics and documented results to The Republican Task Force on Hispanic Affairs, founded and led by Hatch. Ginn was also recently recognized with the “Transformational Leader Award” for the quantifiable impact of the SMART Model in Chicago at the 2018 Heartland Health Centers’ From the Heart Gala. 2018 expansion of the SMART Model has included new, rural SMART clinics opening in Pickens County Alabama, in partnership with the University of Alabama and Dr. Julia Boothe, and two additional Chicago clinics with Heartland Health Centers as the medical provider partner at Gale Community Academy and Hibbard Elementary School. Additional school districts in the Midwest and Northeast participated in this year’s SMART Symposium as they explored the possibility of opening their own SMART Clinics in the 2019–20 school year.

Dr. Peter Hlebowitsh, Dean of the College of Education at the University of Alabama, recommends the institutionalizing of the SMART Model stating, “When noting the evolution of the public-school system and its hallmark features, I can see the day when SMART Centers are as normative within public education as cafeterias—one in every school,” he says.

There’s No Vaccine for the Covid Educational Crisis

WASHINGTON, D.C. - By mid-March, as most schools in America…