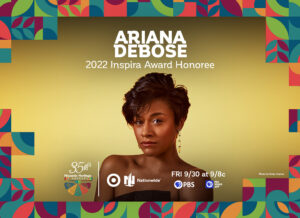 WASHINGTON, DC – The Hispanic Heritage Foundation (HHF) announced today that Academy Award Winning Actress and impassioned advocate Ariana DeBose will receive the 2022 INSPIRA AWARD during the 35th Annual Hispanic Heritage Awards. The historic program, which was created by the White House to commemorate the establishment of Hispanic Heritage Month in America, is among the highest honors by Latinos for Latinos and supported by 40 national Hispanic-serving institutions.

Presented by TARGET with Official Broadcast Sponsorship by Nationwide, and hosted by Google, the 35th Annual Hispanic Heritage Awards will air Friday, September 30th on PBS stations and stream on pbs.org and the PBS Video app.  Ariana DeBose will be recognized alongside recently announced honorees Daddy Yankee, Los Lobos, Marvel Studios’ Victoria Alonso, aviation pioneer Olga Custodio and ‘Back To The Roots’ co-founders Alejandro Velez & Nikhil Arora – with the host and performers of the upcoming broadcast set to be announced shortly.

“The Hispanic Heritage Foundation is deeply honored to recognize Ariana Debose and all she has accomplished but also all she represents as a Latina,” said Jose Antonio Tijerino, president and CEO, HHF.  “Our community is so powerful because we all have unique yet common perspectives, backgrounds and visions and her presence on a national stage is a powerful statement.  She is an embodiment of our Inspira Award which is focused on being a role model to our youth. We are thrilled to tell her story through our partnership with PBS, sponsors and co-hosts, and celebrate our community’s accomplishment, cultural pride, and great promise.”

Ariana DeBose is an award-winning actress known for her varying roles onstage and in film and television. DeBose is best known for her groundbreaking performance in Steven Spielberg’s reimagining of WEST SIDE STORY, for which she received Oscar, BAFTA, Critics Choice, and SAG Awards for her star turning role as Anita. Her performance has received universal critical acclaim, with Variety calling her a “radiant force of nature” and Forbes writing “Ariana DeBose shines in an absolutely star-making performance”. In winning her Oscar, she became the first openly queer Afro Latina to win an Academy Award.

Onstage, DeBose is perhaps best known for her role as “Disco Donna” in Summer: The Donna Summer Musical, which earned her a 2018 Tony Award nomination for Best Featured Actress in a Musical. For the same role, she was nominated for a Drama League Award for “Distinguished Performance” and won a Chita Rivera Award for “Outstanding Female Dancer in a Broadway Show. Her additional stage highlights include appearing alongside Lin-Manuel Miranda in the groundbreaking, Tony-winning musical Hamilton as a member of the original cast  in both the Broadway and off-Broadway productions, as well as the Emmy Award winning film version that was later released on Disney+. After her departure from Hamilton in 2016, DeBose completed a run as Jane in the original Broadway cast of A Bronx Tale.

Earlier this year, DeBose made her SNL guest host debut to rave reviews. Last year, she had a breakout role in Schmigadoon!, the Lorne Michaels’ executive produced Apple TV+ musical comedy series alongside Kristin Chenoweth, Keegan-Michael Key and Cecily Strong, for which she will also return for its second season.  She also received critical acclaim for her performance in Ryan Murphy’s Netflix adaptation of the hit-Broadway musical THE PROM opposite Meryl Streep, Nicole Kidman, Kerry Washington and James Corden.  Next, look for DeBose to star in Sony Pictures’ KRAVEN THE HUNTER which will be released theatrically on January 13, 2023, and Matthew Vaughn’s action film ARGYLLE from Apple, starring opposite Henry Cavill, Bryan Cranston, Samuel L. Jackson and Dua Lipa.

DeBose currently sits on the International Board of Covenant House advocating for homeless youth, many of whom identify as LGBTQ. She is also a board member of A is For, a reproductive rights organization started by Martha Plimpton that works to ensure that all women have access to reproductive and abortion care free of stigma.

The Hispanic Heritage Awards serve as a launch of HHF’s year-round mission focused on education, workforce, social impact and culture through the lens of leadership.  HHF is a 501(c)(3) nonprofit organization. For more information, visit www.hispanicheritage.org and follow the Hispanic Heritage Foundation on Instagram, Facebook, Twitter, and TikTok.