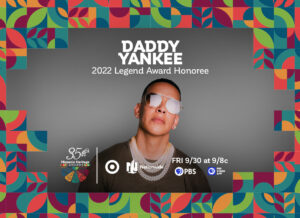 WASHINGTON, DC –  The Hispanic Heritage Foundation (HHF) announced today that Daddy Yankee, Reggaeton’s most influential global ambassador, will receive the 2022 Legend Award during the 35th Annual Hispanic Heritage Awards. The historic program, which was created by the White House to commemorate the establishment of Hispanic Heritage Month in America, is among the highest honors by Latinos for Latinos and supported by 40 national Hispanic-serving institutions. Presented by TARGET with Official Broadcast Sponsorship by Nationwide, and hosted by Google, the 35th Annual Hispanic Heritage Awards will air Friday, September 30th on PBS stations and stream on pbs.org and the PBS Video app. Daddy Yankee will be recognized alongside recently revealed honorees Los Lobos, Marvel Studios’ Victoria Alonso, with additional Latino artists and visionaries to be announced shortly.

“The Hispanic Heritage Foundation is thrilled to honor Daddy Yankee with the Legend Award which is so deserved because of his trailblazing in a form of music that has impacted the world,” said Jose Antonio Tijerino, President and CEO of HHF.  “Simply put, Daddy Yankee is a game-changer.  We also are honoring his service to our community through his work with his foundation Daddy’s House and working with organizations supporting those in need in Puerto Rico and beyond.”

As a culture creator, game changer, agent of change, and groundbreaker, Daddy Yankee has consistently inspired, impacted, and influenced generations of creators. An indisputable icon, he remains one of the most influential artists of all time, bringing reggaeton worldwide for the first time. Latin music and culture would not look, sound, or feel the same without him. It’s hard to even imagine the genre itself without “Gasolina,” “Despacito” [with Luis Fonsi], or “Con Calma” [with Snow], and more.

Since 1995, he has consistently conquered charts, toppled records, and made history on his own terms. The magnitude of his accolades proves nearly impossible to match or exceed. Living up to the title of “King of Reggaeton,” he has moved north of 30 million records as “one of the best-selling Latin music artists of all-time.” Out of hundreds of awards, he has scored five Latin GRAMMY® Awards, two Billboard Music Awards, 14 Billboard Latin Music Awards, two Latin American Music Awards (including the Icon Award), eight Lo Nuestro Awards, an MTV VMA, and six ASCAP Awards in addition to earning a spot on the Puerto Rican Walk of Fame and the “Presencia Latina” at Harvard University. He also stands out as “the only Latin Artist with four Spanish-language entries on the Top 20 of the Billboard Hot 100.” He received “Songwriter of the Year” three times at the 2021 ASCAP Latin Music Awards and distinguished himself as “the first urban Latino artist to enter the Billboard Hall of Fame.” Most importantly, he runs and leads his charity “Daddy’s House,” which Billboard commended with the Spirit of Hope Award .

After changing the face of Latin music forever, he leaves on the highest note possible in 2022 with his twelfth full-length offering and final album, LEGENDADDY, brought to life with his farewell tour, LA ÚLTIMA VUELTA (The Last Round). The album combines the essence of Reggaeton with salsa, dancehall, rap, trap bachata, EDM, and Caribbean music like never before

The Hispanic Heritage Awards serve as a launch of HHF’s year-round mission focused on education, the workforce, and social impact through the lens of leadership and culture.  HHF is a 501(c)(3) nonprofit organization. For more information, visit www.hispanicheritage.org and follow the Hispanic Heritage Foundation on Instagram, Facebook, Twitter, and TikTok.