Hosted by Actress Justina Machado (ONE DAY AT A TIME) 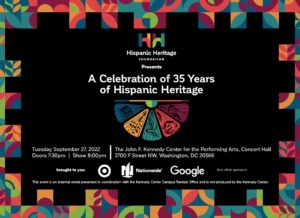 In addition, HHF will pay tribute to the 2022 Hispanic Heritage Awardees through special vignettes presented by entertainers and partners including AARP, Boeing, the Coca Cola Company, Friends of the National Latino Museum, Nationwide, Southwest Airlines. The video segments will be featured on the PBS Broadcast on September 30th on PBS stations and streaming on pbs.org and the PBS video app.

“The Hispanic Heritage Foundation is thrilled to be back home at the Kennedy Center to come together and celebrate the Latino community’s accomplishments, cultural pride and our great promise,” said Jose Antonio Tijerino, President and CEO of the Hispanic Heritage Foundation. “We will be honoring our presence in this great country – past present and future – through dynamic performances, inspirational stories, and solidarity which we will need to continue to move our community and country forward. We are extremely grateful to partner with Target, Nationwide, Google and all our sponsors who share our vision and mission.”

As part of the festivities, HHF will also be hosting additional in-person events including the Latinos On Fast Track Leadership Institute (LLI) Open Space Summit  on September 26th in partnership with The White House, and Honorees Welcome Reception; White House Briefing, Red Carpet and After Party surrounding the Hispanic Heritage Celebration at the Kennedy Center on September 27th.

Many of this year’s honorees, including Marvel Studios executive producer Victoria Alonso; multiple Grammy winners Los Lobos; aviation pioneer Olga Custodio; and ‘Back To The Roots’ co-founders Alejandro Velez & Nikhil Arora, will join the in-person celebration at the Kennedy Center.

The Hispanic Heritage Awards serve as a launch of HHF’s year-round mission focused on education, workforce, identity and social impact through the lens of leadership and culture.  HHF is a 501(c)(3) nonprofit organization. For more information, visit www.hispanicheritage.org and follow the Hispanic Heritage Foundation on Instagram, Facebook, Twitter, and TikTok.