The Hispanic Heritage Foundation (HHF) experienced all four days of Hispanicize 2017 in Miami! 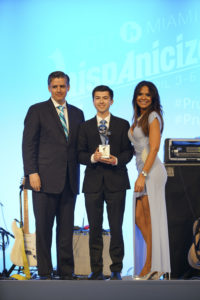 On Tuesday night, the Positive Impact Awards awarded a few special Latinos who have made a significant difference in their communities, and our very own Code as a Second Language (CSL) Fellow Dante Alvarado-Leon was awarded the Positive Impact Awards Person of the Year, and the STEM Star Award! Dante is finishing up his last semester at the UC Berkley and has worked with our CSL program for about 3 years. Dante recently secured a position as a Software and Platform Analyst at Accenture.

Thank you for your dedication to our community Dante, HHF was excited to be present at the Awards and celebrate you! 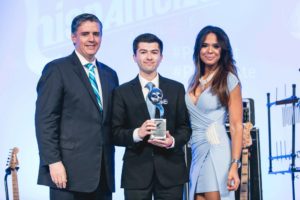 Dante gave a speech from the heart, and left the crowd in tears. Shortly after the Awards Dante said, “I am humbled and speechless to share that I was selected as the Positive Impact Awards Person of the Year and the STEM Star Award yesterday. In Dante’s words: “Thank you Hispanicize and Prudential for the recognition, and a big shoutout to all of you for your support, I couldn’t have done it without you! Last night I made a leap, I believed in myself and took a risk. In front of a full room of hundreds of community champions and leaders from around the nation, I spoke from my heart during my acceptance speech, and was vulnerable. I shared my voice, my journey, and my feelings about the current state of our nation. This is just the beginning, and I am committed to continue fighting for our community with a relentless heart, and passion to open doors of opportunity for others, in the service of humanity.”

A private screening of film, “Hold On,” was also featured at Hispanicize! Lead actress Micayla De Ette was present, along with actors Luiz Guzman and Maurice Bernard who told the Miami crowd just how personal this film was for everyone included, and answered other questions exclusive to Hispanicize attendees. Read our “Hold On” recap here!

Hispanicize ended with the 3rd Annual Tecla Awards at the Olympia Theater in Downtown Miami! Bloggers, influencers, and other trendsetters were awarded social media creator awards including Best-Spanish-Language Creator, Best Latino Celebrity on Social Media, Breakout Creator of the Year, Social Good, among others!

As the Marketing and PR Coordinator for HHF, Hispanicize 2017 was a truly unforgettable experience. Latinos from marketing, advertising, journalism, tech, and entertainment came together and offered their insight and advice. Hispanicize was the perfect space to connect with Latino leaders who are working to help other leaders across the country!