The Already Announced 2022 Honorees Are: 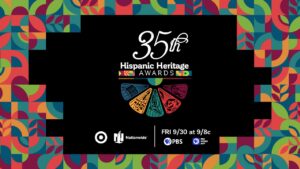 WASHINGTON, DC –  The Hispanic Heritage Foundation (HHF) today announces this year’s host, and performers for the 35thth Annual Hispanic Heritage Awards –  to be broadcast Friday, September 30th, on PBS Stations. The historic program, which was created by the White House to commemorate the establishment of Hispanic Heritage Month in America, is among the highest honors by Latinos for Latinos and supported by 40 national Hispanic-serving institutions. (An announcement about HHF’s in-person Hispanic heritage celebration in Washington, DC, is forthcoming.)

Modeled on the same format which set new ratings records for the broadcast across the last two years, this year’s presentation will once again feature intimately filmed segments captured on location across the United States and Latin America. In addition to the exclusive honoree profiles (detailed again below), the show will be hosted by actress Stephanie Beatriz – widely known for voicing the character of Mirabel Madrigal in Disney’s Oscar-winning 2021 film Encanto, as well as her portrayal of Carla  in the motion picture adaption of In The Heights, and as Detective Rosa Diaz in the action-comedy tv series Brooklyn Nine-Nine.

“We are thrilled to honor yet another inspirational class of Hispanic Heritage Awardees, and to pay tribute to them through these amazing performers and entertainers on the PBS broadcast,” said Jose Antonio Tijerino, president and CEO of HHF.  “Thanks to PBS and our corporate partners we will be able to share our celebration of cultural pride, accomplishment, and vision with all of America during Hispanic Heritage Month and year-round.  Stay tuned for our announcement for the in-person celebration.”

The Hispanic Heritage Awards serve as a launch of HHF’s year-round mission focused on education, workforce, social impact and culture through the lens of leadership.  HHF is a 501(c)(3) nonprofit organization. For more information, visit www.hispanicheritage.org and follow the Hispanic Heritage Foundation on Instagram, Facebook, Twitter, and TikTok.