With the socio-political climate’s new challenge to presupposed images of power in the form of movements like #MeToo and #TimesUp, it’s beginning to seem like the future is indeed female. Similarly to how Millennials played a part in those movements, the Millennial generation holds great weight in determining the nature of the political future for the comunidad Hispana in America.

For a long time political analysts have identified the Hispanic community as a whole as “The Sleeping Giant,” a moniker nodding towards the community’s formidable population but comparatively low political participation. However, with tensions rising in a nation divided and the increasing urgency for political engagement, are Millennials the generation to finally awaken the “Giant”? What makes the Millennial Hispano’s reign of influence particularly significant to the Hispano community and consequently the nation as a whole?

To better understand the political influence the Hispano Millennial holds, we must first ask; how much of the Hispanic community is made up of Millennials, or 18-33 year olds?

To analyze the environment this large proportion of Hispanos are living in, we may look at the status quo for all millennials. Today’s young people are living in a contentious, politically divisive time. A time that will also be definitive for the human race’s future on Earth as we rise to meet the challenges of climate change. A time filled with new technology shaping our social interactions, informing the process as new social norms take form. A time filled with unprecedented levels of social unrest. This is the socio-political climate in which the youngest racial demographic in America is emerging.

Moreover, not only is a major population of Hispanos Millennial, but just as importantly many are immigrants. 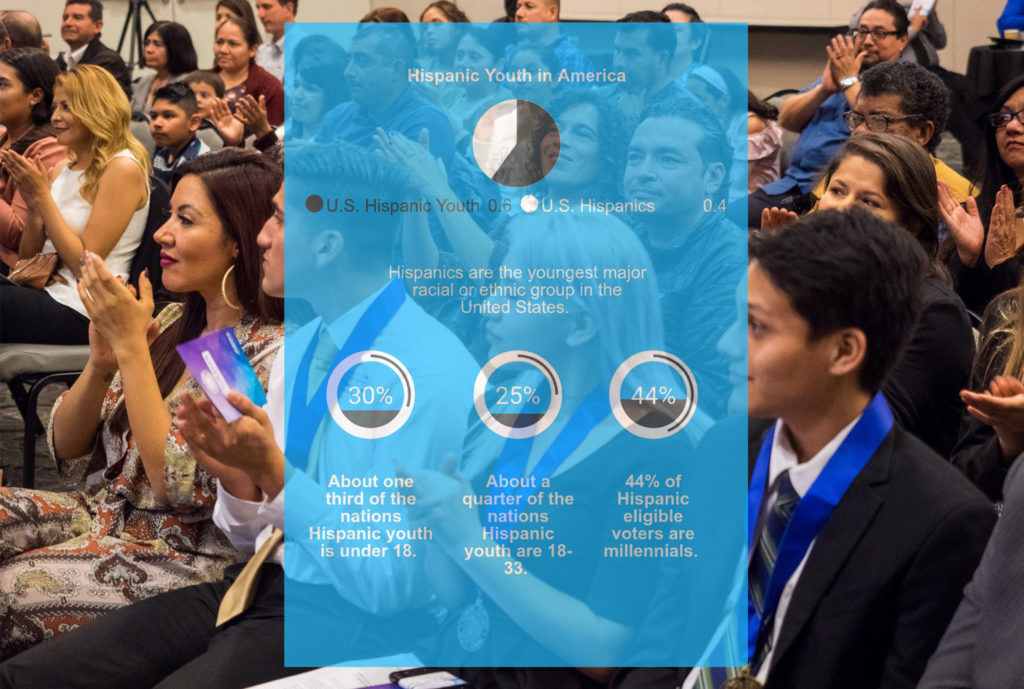 The aforementioned striking statistics reflecting such a dominant portion of the Hispanic population being young people serve to point to the Hispanic Millennials’ intrinsic ties to the immigrant narrative. This multicultural facet of the Hispano Millennial embeds the population into the hurricane’s eye of a contentious and tumultuous national discourse around increasingly fearful sentiments of immigrants from non-European countries.

In spite of rising anti-immigrant sentiments in America, many Hispanos and allies across the country are combating these attacks. “Give me your tired, your poor, Your huddled masses yearning to breathe free…” So reads the Statue of Liberty in a poem symbolizing the great debt of and to this great country’s rich immigrant culture. As a contentious national dialogue murks and confounds the immigrant narrative in this country, this poem has become an unwavering affirmation of truth and identity. America is native, America is migrant, America is intersectional. 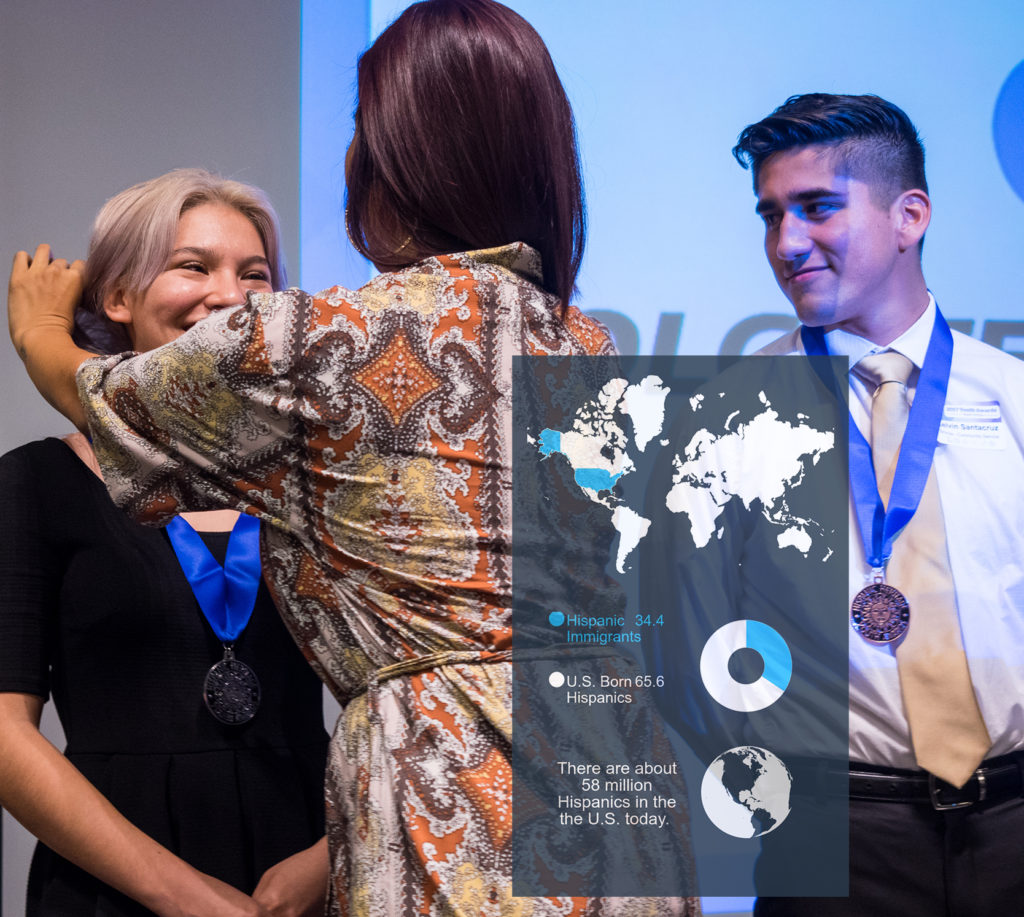 The Hispano Millennial’s quest for the American Dream and integration into representation in the process of policymaking during an imperative era is an emblem of our comunidad’s political promise, DREAMs and hope for economic mobility. These shared values and aspirations all immigrants hold dear are put into action by a Hispanic community that has worked to assimilate and join the American fabric. 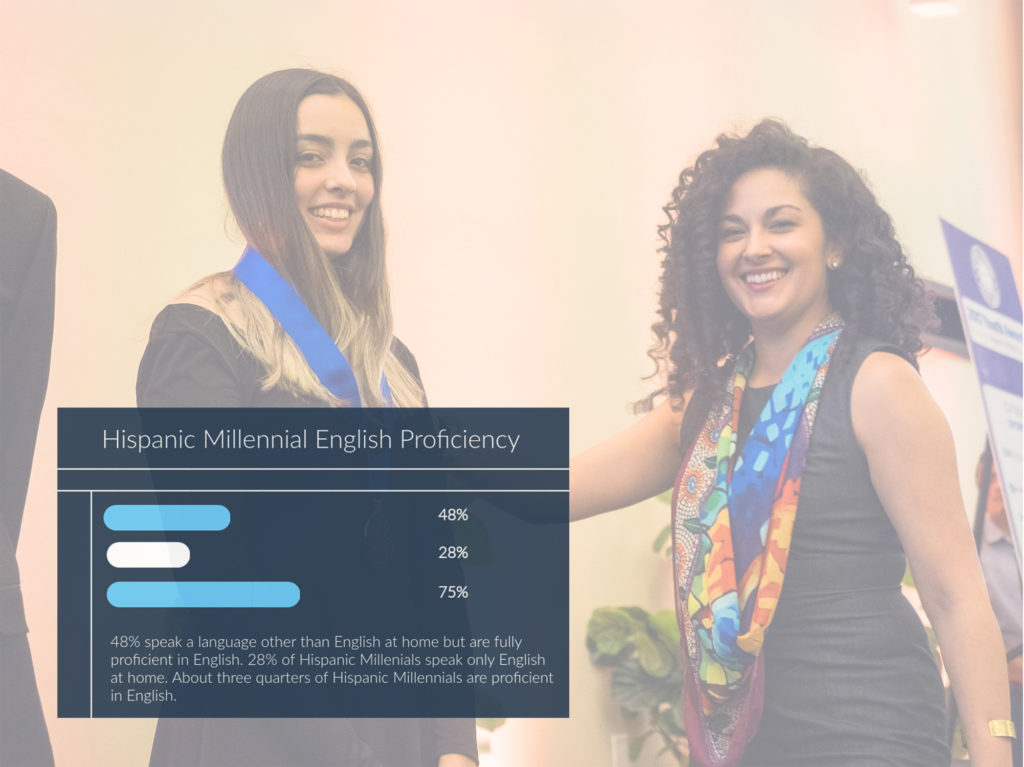 In spite of Hispano’s close proximity to the immigrant narrative, they are assimilated to fully partake in American society. 48% speak a language other than English at home and they are nonetheless also fully proficient in English. English proficiency doesn’t come at the cost of the Hispano Millennial cultural identity, as only 28% of Hispanic Millennials speak only English at home. A dominant  ¾ of Hispanic Millennials are fully proficient in English. The comunidad’s English proficiency rate is a symbol of our ability to adapt, assimilate, yet retain our strong and vibrant cultural roots. A factor that speaks on the Hispano Millennial’s dual patriotism and love of culture.

To isolate this population is both a loss for them as well all Americans.

With many human rights issues, economic policies, diplomatic relations, healthcare policy concerns and increasing social unrest hanging in the balance, Hispanos must participate in the political process. With a faith in the American Dream born of personal sacrifices and deeds, we are an integral part of the American fabric and can play a decisive role in sensitive and imperative policy. By including and listening to this community, public servants can commit a service to all of their constituents. A service that will not be easily forgotten by voters.

The Hispano Millennial voter is simply a force that can no longer be ignored by policy makers. 44% of Hispanic eligible voters are Millennials. They are informed and social dialogue points to increased frustration by the lack of support from policy makers. Today, all voters are keeping tabs. With the power to shift elections, mobilize public servants and affect policy, the Hispanic Millennial voter will be monumental in the upcoming midterm election.

To the Hispanic voter, the issues of education, economy, healthcare, and domestic and foreign terrorism are most crucial, in that respective order. With many initiatives across the nation from institutions like Voto Latino, The Hispanic Heritage Foundation, The California Endowment and more registering young voters of all backgrounds, an increasing desire for accountability in politics, and Hispanic specific issues like DACA hanging in inaction, the stage is set for the Hispanic Millennial voter to make its mark in American elections.

What will the results be? Ballots checked by brown American hands across our nation will tell.

THE COLOMBIAN-AMERICAN SINGER WILL ALSO PERFORM DURING THE 34th HISPANIC…

Honoree Tributes and Performances to be Filmed on Location Across…