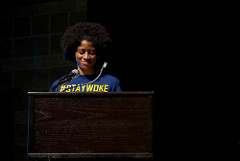 The theme of the night was “Stay Woke” and was an inspirational celebration of B-CC Diversity, Unity and Pride thr
ough the Arts. Antonio spoke about the empowerment of the youth, and how important it is to stay vigilant of all issues occurring in these times.

Others included “Our Story,” written and performed by Lydia Adebe, Mitchell Costello, Olivia Juliano, Asia Perez and Gabby Valderrama, “I Know Where I’ve Been,” by Queen Latifah performed by Micah Loebig, and a dance performance by Dance Expression! Closing remarks were presented by B-CC Principal, Dr. Donna Redmond-Jones.

B-CC High School is home to our 2016 National Youth Awardee, Maria Salmeron who received the Education National Youth Award. Maria is a distinguished vanguard leader in the ethnic diversity spaces and closing the achievement gap that exists between African American and Latino students and their counterparts. Maria’s mother, Supaya Melendez, was also the recipient of the 2016 Parent Award, presented by Learning Heroes.

Antonio has led the 29-year-old nonprofit for 16 years and has developed an ecosystem of over 100,000 vetted students and young professionals (ages 15-35) ready to lead America forward in various fields. Speaking at events is just one way Antonio informs students and other professionals on education, workforce, leadership and public awareness!

HHF stays connected with all Youth Awardees, CSL Fellows and others within the Latinos on Fast Track (LOFT) program, that is the beautiful connection that exists within the HHF familia!