– Presented By TARGET, With Broadcast Sponsorship By NATIONWIDE – 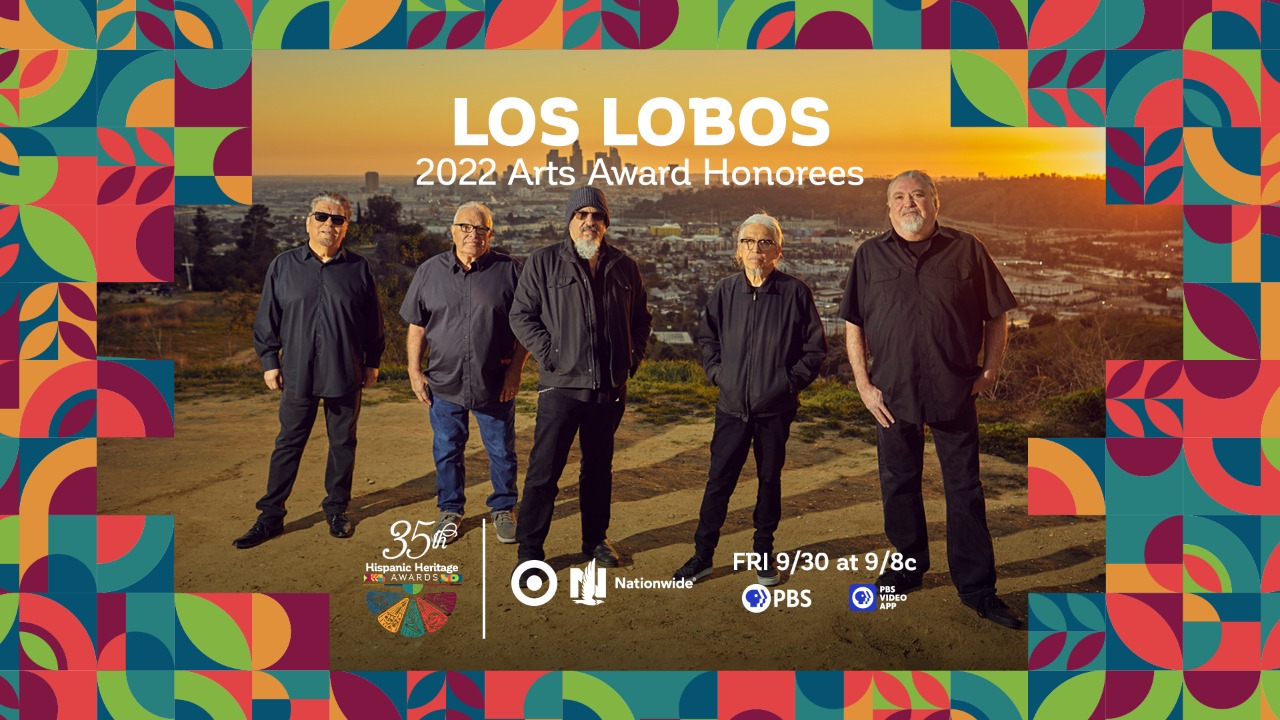 WASHINGTON, DC –  The Hispanic Heritage Foundation (HHF) announced today that the 35th ANNUAL HISPANIC HERITAGE AWARDS, Presented by TARGET with Official Broadcast Sponsorship by Nationwide, will air Friday, September 30th on PBS stations and stream on pbs.org and the PBS Video app. The historic program, which was created by the White House to commemorate the establishment of Hispanic Heritage Month in America, is among the highest honors by Latinos for Latinos and supported by 40 national Hispanic-serving institutions.

Multiple GRAMMY winning-band LOS LOBOS is also the first announced honorees this year and will be presented with the Hispanic Heritage Arts Award.  Stay tuned for additional honoree, host, and performance announcements for the 35th Annual Hispanic Heritage Awards.

“Los Lobos is an American roots band, and those roots run deep from their East Los Angeles barrio to influences from blues, rock, jazz, and, of course, Mexican and all Latin American music,” said Jose Antonio Tijerino, president and CEO, HHF.  “Those ingredients created a unique sound and representation that has never been comprised, which is why the Hispanic Heritage Foundation is  honored to recognize Los Lobos with our Arts Award.  We are also extremely grateful to once again partner with Target to celebrate and share the Latino community’s accomplishments, cultural pride and great promise.  We are also thankful to share our celebration with the entire country and beyond through our partnership with PBS and Nationwide.”

“As the presenting sponsor of the Hispanic Heritage Awards for the ninth consecutive year, Target is proud to celebrate the incredible accomplishments of the Latino community and its lasting contributions to our communities, our country and the world,” said Laysha Ward, Target’s Executive Vice President and Chief External Engagement Officer. “We are inspired by the 2022 honorees and honored to help share their stories that have shaped our culture.”

“Nationwide is honored to, once again, support the awards presentation and broadcast of this special showcase of Hispanic excellence,” said Ramon Jones, Chief Marketing Officer at Nationwide. “We look forward to celebrating the many cultural contributions of this year’s inspiring honorees.”

“PBS is proud to broadcast the Hispanic Heritage Awards for the eighth year,” said Sylvia Bugg Chief Programming Executive and General Manager, General Audience Programming at PBS. “We are committed to serving the diverse communities of our country and celebrating the cultures that make it so unique. We look forward to honoring the remarkable contributions of Latino Americans for years to come.”

The journey of the 2022 Hispanic Heritage Arts Award honoree Los Lobos began in 1973, when David Hidalgo, Louie Perez, Cesar Rosas and Conrad Lozano earned their stripes playing revved-up versions of Mexican folk music in restaurants and at parties. The band evolved in the 1980s as it tapped into L.A.’s burgeoning punk and college rock scenes. Los Lobos enjoyed critical success early on, winning the GRAMMY® for Best Mexican American Performance for “Anselma” from their 1983 EP …And a Time to Dance. A year later, the group was joined by saxophonist Steve Berlin and released its full-length, major-label debut, How Will the Wolf Survive? – which became a college rock sensation that helped Los Lobos tie with Bruce Springsteen as Rolling Stone’s Artist of the Year. Additional milestones followed when Los Lobos’ rendition of Richie Valens’ signature song “La Bamba” topped U.S. and UK charts in tandem with the same named 1987 movie biopic, followed by a second GRAMMY win in 1989 for La Pistola y El Corazón, a tribute to Tejano and Mariachi music.

That kind of sharp artistic turn has become Los Lobos’ trademark, serving to both fuel the band’s creativity and keep its fans engaged as they continued to deliver daring and diverse albums, such as 1992’s landmark hit Kiko and many more to follow – including celebrated Live recordings, tribute albums, and additional movie soundtracks. To date, Los Lobos has sold millions of records, won numerous prestigious awards and made fans around the world as an always dynamic live touring band.  But perhaps their most lasting impact is how well their music embodies the idea of America as a cultural melting pot. In it, styles like son jarocho, norteño, tejano, folk, country, doo-wop, soul, R&B, rock ’n’ roll and punk all come together to create a new sound that’s greater than the sum of its parts. This makes it all the more fitting that this year sees the band garner a fourth GRAMMY Award, as their latest album Native Sons  won for Best Americana Album and join the pantheon of  leading cultural figures recognized by The Hispanic Heritage Awards.

The Hispanic Heritage Awards serve as a launch of HHF’s year-round mission focused on education, the workforce, and social impact through the lens of leadership and culture.  HHF is a 501(c)(3) nonprofit organization. For more information, visit www.hispanicheritage.org and follow the Hispanic Heritage Foundation on Instagram, Facebook, Twitter, and TikTok

Minneapolis-based Target Corporation (NYSE: TGT) serves guests at nearly 2,000 stores and at Target.com. Since 1946, Target has given 5% of its profit to communities, which today equals millions of dollars a week. For the latest store count or more information, visit Target.com/Pressroom. For a behind-the-scenes look at Target, visit Target.com/abullseyeview or follow @TargetNews on Twitter.

Nationwide, a Fortune 100 company based in Columbus, Ohio, is one of the largest and strongest diversified insurance and financial services organizations in the United States. Nationwide is rated A+ by both A.M. Best and Standard & Poor’s. An industry leader in driving customer-focused innovation, Nationwide provides a full range of insurance and financial services products including auto, business, homeowners, farm and life insurance; public and private sector retirement plans, annuities, mutual funds and ETFs; excess & surplus, specialty and surety; pet, motorcycle and boat insurance. For more information, visit https://www.nationwide.com/. Follow on Facebook and Twitter.

PBS, with more than 330 member stations, offers all Americans the opportunity to explore new ideas and new worlds through television and digital content. Each month, PBS reaches over 120 million people through television and 26 million people online, inviting them to experience the worlds of science, history, nature and public affairs; to hear diverse viewpoints; and to take front row seats to world-class drama and performances. PBS’ broad array of programs has been consistently honored by the industry’s most coveted award competitions. Teachers of children from pre-K through 12th grade turn to PBS for digital content and services that help bring classroom lessons to life. Decades of research confirms that PBS’ premier children’s media service, PBS KIDS, helps children build critical literacy, math and social-emotional skills, enabling them to find success in school and life. Delivered through member stations, PBS KIDS offers high-quality educational content on TV – including a 24/7 channel, online at pbskids.org, via an array of mobile apps and in communities across America. More information about PBS is available at www.pbs.org, one of the leading dot-org websites on the internet, or by following PBS on Twitter, Facebook or through our apps for mobile and connected devices. Specific program information and updates for press are available at pbs.org/pressroom or by following PBS Communications on Twitter.

The Hispanic Heritage Foundation will continue to combat homophobia, transphobia, biphobia and acephobia or any form of hate while embracing and supporting the LGBTQ+ community

Program to Prepare, Certify and Position Latinos for the Future…

The 35th Hispanic Heritage Awards can now be watched via streaming at pbs.org & the PBS Video App

Watch The Entire Show, Or All Individual Segments To Discover…