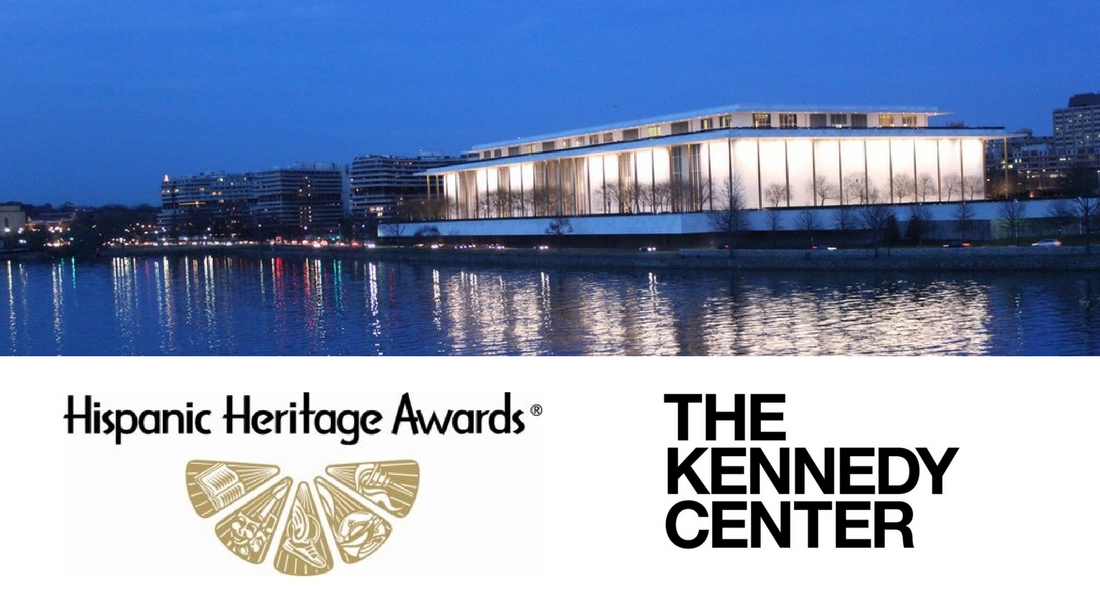 JOHN F. KENNEDY CENTER FOR THE PERFORMING ARTS TO WELCOME BACK THE 31st HISPANIC HERITAGE AWARDS ON SEPTEMBER 12

PBS TO BROADCAST HISTORIC PROGRAM NATIONALLY FOR THE 5TH YEAR

WASHINGTON, DC – The Hispanic Heritage Foundation (HHF) announced today that the 31st Annual Hispanic Heritage Awards will return to the John F. Kennedy Center for the Performing Arts in Washington, DC, on Wednesday, September 12, 2018.  The historic program, which was created by the White House in 1987 to commemorate establishment of Hispanic Heritage Month in America, will also be broadcast nationally on PBS stations. The Awards are among the highest honors by Latinos for Latinos, and are supported by 40 national Hispanic-serving institutions.

“The Hispanic Heritage Foundation is thrilled to be back at the Kennedy Center and on PBS to collectively celebrate and share the great promise, accomplishments, and cultural pride of the Latino community through the 2018 Awardees and the powerful performances on the venerable stage,” said Jose Antonio Tijerino, President and CEO of the Hispanic Heritage Foundation. “More than ever, it’s important to shine the spotlight on the tremendous value Latinos provide this great country we all share.”

The 2018 #HHAwards Honorees will be announced over the coming months followed by the performers, hosts and presenters. Visit this page for updates and check out our YouTube Sizzle Reel.

“We are delighted to welcome the return of the Hispanic Heritage Awards to the Kennedy Center,” commented Deborah F. Rutter, Kennedy Center President. “Central to the Center’s mission is our belief that the artists and programming we bring to our stages must reflect the rich cultural diversity of both America and the world. We wish the Hispanic Heritage Foundation much success with this year’s awards program.”

“We are pleased to join the Hispanic Heritage Foundation and the Kennedy Center for Performing Arts in honoring the significant contributions of Latino Americans to our country,”added Paula Kerger, President & CEO, PBS.“We look forward to celebrating the 2018 Hispanic Heritage Awardees during the 5th broadcast on PBS this fall.”

The Hispanic Heritage Awards serve as a launch of HHF’s year-round, award-winning programs which inspire, prepare and connect Latino leaders in the classroom, community and workforce to meet America’s needs as well as promoting cultural pride.  HHF is a 501(c)(3) nonprofit organization.  For more information on the mission of HHF visit www.hispanicheritage.org.

About The John F. Kennedy Center for the Performing Arts

The John F. Kennedy Center for the Performing Arts is America’s living memorial to President Kennedy. Under the guidance of Chairman David M. Rubenstein, and President Deborah F. Rutter, the nine theaters and stages of the nation’s busiest performing arts facility attract more than three million visitors to more than 2,000 performances each year, while center-related touring productions, television, and radio broadcasts reach 40 million more around the world.

The Center produces and presents performances of music, dance, comedy, Hip Hop, and theater; supports artists in the creation of new work; and serves the nation as a leader in arts education. With its artistic affiliates, the National Symphony Orchestra and Washington National Opera, the Center has produced more than 300 theatrical productions, and dozens of new ballets, operas, and musical works, in addition to hosting numerous international cultural festivals. The Center’s Emmy ® and Peabody Award–winning The Kennedy Center Honors is broadcast annually on CBS and annual The Kennedy Center Mark Twain Prize for American Humor is broadcast on PBS.

The education programs of the Kennedy Center, including those of its affiliate VSA, the international organization on arts and disability, have become models for communities across the country and have unlocked the door to learning for millions of young people. Education at the Kennedy Center produces and presents age appropriate performances and educational events, and fosters innovative programming, curriculum, and professional development for students, teachers, and families.

The Center and its affiliates stage more than 400 free performances by artists from throughout the world each year on the Center’s main stages, and every day of the year at 6 p.m. on its Millennium Stages, which are also streamed live, online. The Center also offers reduced and complimentary tickets to young people, active members of the military, and the underserved through its MyTix program and offers a Specially Priced Tickets program for students, seniors, persons with disabilities, and others with fixed low incomes. To learn more about the Kennedy Center, please visit www.kennedy-center.org.

PBS, with nearly 350 member stations, offers all Americans the opportunity to explore new ideas and new worlds through television and digital content. Each month, PBS reaches over 90 million people through television and 30 million people online, inviting them to experience the worlds of science, history, nature and public affairs; to hear diverse viewpoints; and to take front row seats to world-class drama and performances. PBS’ broad array of programs has been consistently honored by the industry’s most coveted award competitions. Teachers of children from pre-K through 12th grade turn to PBS for digital content and services that help bring classroom lessons to life. Decades of research confirms that PBS’ premier children’s media service, PBS KIDS, helps children build critical literacy, math and social-emotional skills, enabling them to find success in school and life. Delivered through member stations, PBS KIDS offers high-quality educational content on TV – including a 24/7 channel, onlineat pbskids.org, via an array of mobile apps and in communities across America. More information about PBS is available at www.pbs.org, one of the leading dot-org websites on the internet, or by following PBS on Twitter, Facebook or through our apps for mobile and connected devices. Specific program information and updates for press are available at pbs.org/pressroom or by following  PBS Pressroom on Twitter.

For more information on the 2018 Hispanic Heritage Awards or to request media credentials, please contact John Reilly at  212.878.5076 /  jreilly@rogersandcowan.com  or Sylvia Bedrosian: sbedrosian@rogersandcowan.com