– Plus, A “West Side Story at 60” Retrospective, And An All-Star Musical Tribute To Carlos Santana, Starring:

Watch the trailer for the Awards

“The Hispanic Heritage Foundation is thrilled to recognize the incomparable Salma Hayek with the Arts Award,” said Jose Antonio Tijerino, President and CEO of HHF.  “As an international star, Salma has leveraged her position and representation to impact the entire industry, as well as inspire youth while proudly representing her culture.  What makes Salma our Arts Awardee is that her goals have never been about her. She wanted to create opportunities for others and grow the entertainment industry to have more representation in front and behind the cameras like she did with FRIDA, which earned her two Academy Awards nominations.  But even that wasn’t enough, Salma continues her commitment to change the face of Hollywood on screen and off.”

Modeled after last year’s PBS broadcast, (which garnered the highest ratings and reached more viewers then ever before in the event’s history), this year’s presentation will once again feature more intimately filmed segments captured on location across the United States and Latin America. In addition to the exclusive honoree profiles, the show will be hosted by former Hispanic Heritage Award winner JOHN LEGUIZAMO and showcase an impressive set of performances celebrating the richness and stylistic diversity of Hispanic music and culture.  These special guests will include: CIMAFUNK, LESLIE GRACE, KALI UCHIS, GABRIELLA REYES (& The American Pops Orchestra) – plus, a “West Side Story at 60” retrospective, and an all-star musical tribute to Carlos Santana, Starring: ALLY BROOKE, BLACK PUMAS, ALEX CUBA, JUANES And THE MAVERICKS.

“Having John Leguizamo come back to host is a special moment after he received the very award he will be presenting to this year’s class of honorees,” added Tijerino. “We also look forward to celebrating Salma and all the Awardees with compelling performances by such a dynamic group of performers on PBS to celebrate Hispanic Heritage Month with all of America. 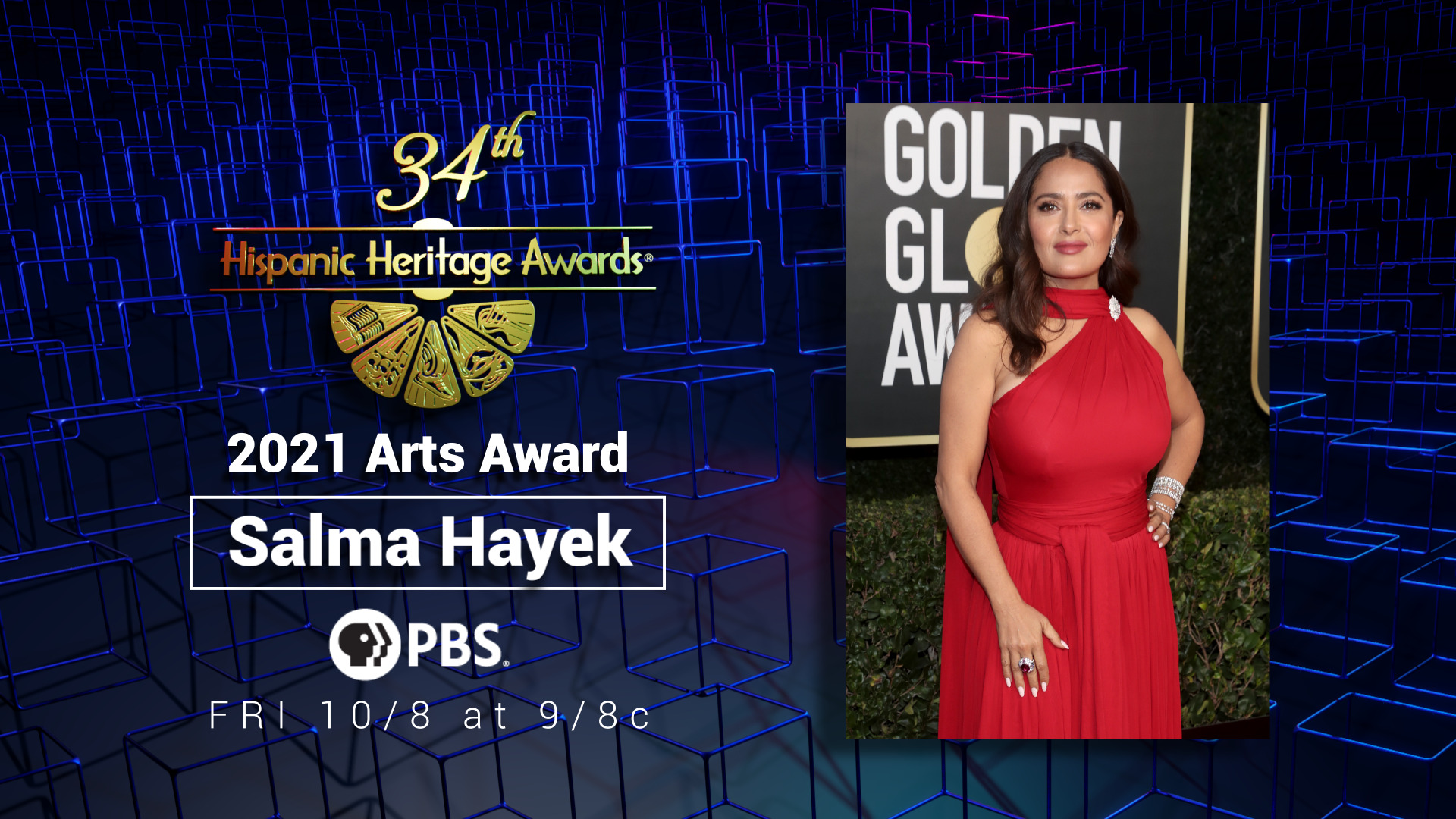 Salma Hayek is an Academy Award nominated actress, an Emmy-award winning director and an acclaimed producer in both film and television.  Born in Coatzacoalcos, Mexico – Hayek started her career as an actress in Mexican telenovelas. Her first feature film was an adaptation of MIDAQ ALLEY, based on the novel by Nobel prize winner Naguib Mafouz. As a Latin-American born actress, Salma Hayek was the first in decades that broke into the American film market, starring opposite Antonio Banderas in Robert Rodriguez’s DESPERADO, with whom she continued to do six other films, including ONCE UPON A TIME IN MEXICO opposite Johnny Depp and FROM DUSK TILL DAWN, written by Quentin Tarantino and starring opposite George Clooney.  Some of Hayek’s other work BLISS, THE ROADS NOT TAKEN, BEATRIZ AT DINNER for which she was nominated for an Independent Spirit Award; THE HUMMINGBIRD PROJECT, THE HITMANS BODYGUARD, HOW TO BE A LATIN LOVER, SOME KIND OF BEAUTIFUL, and TALE OF TALES which premiered at the 2015 Festival De Cannes to the longest standing ovation in the festival’s history.  She furthermore starred in FOOLS RUSH IN , SAVAGES, HERE COMES THE BOOM, DOGMA, the Academy Award nominated PUSS IN BOOTS, THE VAMPIRE’S ASSISTANT, LONELY HEARTS, BANDIDAS, AFTER THE SUNSET, TIMECODE, and many more.

Hayek’s breakthrough as a producer was with Julie Taymor’s FRIDA, which premiered at the Venice film festival. The movie earned many international awards and nominations including six Oscar nominations. Hayek’s performance in FRIDA earned her nominations for an Academy Award, Bafta, Golden Globe, Screen Actors Guild award and she was awarded Germany’s prestigious Golden Camera.  On television, she starred in NBC’s critically acclaimed show 30 ROCK, won an Emmy for her directorial debut- THE MALDONADO MIRACLE, and served as executive producer on ABC’s award-winning program UGLY BETTY.

On November 5, 2021, Hayek will be seen in Marvel’s long awaited film ETERNALS, which tells the story of the race of immortal beings who lived on Earth and shaped its history and civilizations. She will also be seen in the highly anticipated November 24th crime drama release of HOUSE OF GUCCI.

The Hispanic Heritage Awards serve as a launch of HHF’s year-round programs focused on education, workforce, social impact through the lens of leadership.   HHF is a 501(c)(3) nonprofit organization.  For more information, visit www.hispanicheritage.org and follow the Hispanic Heritage Foundation on Instagram, Facebook and Twitter. Visit www.HispanicHeritage.org.

PBS, with more than 330 member stations, offers all Americans the opportunity to explore new ideas and new worlds through television and digital content. Each month, PBS reaches over 120 million people through television and 26 million people online, inviting them to experience the worlds of science, history, nature and public affairs; to hear diverse viewpoints; and to take front row seats to world-class drama and performances. PBS’ broad array of programs has been consistently honored by the industry’s most coveted award competitions. Teachers of children from pre-K through 12th grade turn to PBS for digital content and services that help bring classroom lessons to life. Decades of research confirms that PBS’ premier children’s media service, PBS KIDS, helps children build critical literacy, math and social-emotional skills, enabling them to find success in school and life. Delivered through member stations, PBS KIDS offers high-quality educational content on TV – including a 24/7 channel, online at pbskids.org, via an array of mobile apps and in communities across America. More information about PBS is available at www.pbs.org, one of the leading dot-org websites on the internet, or by following PBS on Twitter, Facebook or through our apps for mobile and connected devices. Specific program information and updates for press are available at pbs.org/pressroom or by following PBS Communications on Twitter.

Find full background and additional press material on all of this year’s honorees & other participants at: https://pressroom.pbs.org/Programs/h/HISPANIC-HERITAGE-AWARDS-2021

For more information on the Awards, contact John Reilly at (jreilly@jrprmusic.com)